Jane Rosenberg LaForge was born in Los Angeles and raised in the suburb of Laurel Canyon, where she attempted to rub shoulders with the hip and famous. Though she was not successful in that endeavor, she rode horses, took ballet lessons, participated in the Renaissance Pleasure Faire, and graduated from Hollywood High School. After finishing her bachelor’s at UCLA, she worked as a journalist in California, Maryland, and upstate New York. She studied writing in the Kate Braverman workshops of the early 1990s in Los Angeles before attending the University of Massachusetts, Amherst. At UMass, she was a Delaney Fellow and a researcher for two of Jay Neugeboren’s books on the public health system, Transforming Madness and Open Heart. Since earning her MFA, she has taught college reading, composition, and literature part-time in the New York metropolitan area; published critical articles on African-American literature; and four volumes of poetry: After Voices (Burning River 2009); Half-Life (Big Table Publishing Co. 2010); With Apologies to Mick Jagger, Other Gods, and All Women (The Aldrich Press 2012); and The Navigation of Loss (Red Ochre Press 2012), one of three winners of the Red Ochre Press’ annual chapbook competition. She has been nominated twice for a Pushcart Prize (once for poetry, and once for fiction) and once for a StorySouth Million Writers Award. She lives in Manhattan with her husband, Patrick, and their daughter, Eva.

LaForge is the author of An Unsuitable Princess

“I had an idea for a piece of fan fiction that would be annotated—so I would write the fan fiction, and then I would explain why I was doing what I was doing in the footnotes—and I never really got around to writing that. That was just an idea that I had. And then, as I was writing the fairy tale, I realized that the fairy tale was very… pedestrian. It’s the same story, over and over again. And in order to make something out of it, if I put footnotes on it, I thought it would make it more interesting. And by the same token, if I wrote the memoir, the events of the memoir were also very pedestrian—you know, everybody feels misunderstood as a teenager. The story of the leukemia victim is very 1970’s TV “Movie of the Week.” Separately, I don’t think they mean much. But the combination of them together… I think does mean something. And as I was writing the memoir, and as I was writing my memories of junior high, you know, teenage girls writing poetry, I thought, “You know, this would be good to have the protagonist of the fairy tale speak in poetry, since she cannot speak in any other way.” And that it would fit in with the footnotes. So, I had a couple of poems that sort of fit anyway—I had to change them a little bit—and then I just wrote some more. So, I’d had the idea of an annotated story for quite some time, it just took a few years’ time to figure out exactly how I was going to do it.” 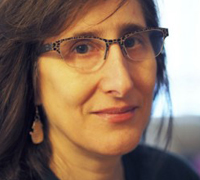