Carol Ciavonne’s poetry is both lyrical and experimental and has been noted for its visual imagery. Poems have appeared in Denver Quarterly, Boston Review, Colorado Review, New American Writing and How2, among other journals. She was the recipient of the PSA Lyric Poetry Prize in 2004. Her essays and reviews have appeared in Poetry Flash, Xantippe, and Pleiades. She was selected as a workshop participant at the New York Center for Book Arts in 2007, and was a writer in residence at the Pécs Writers Program in Pécs, Hungary, in 2013. She recently published, along with artist Susana Amundaraín, an art/poetry dialogue (Birdhouse Dialogues, LaFi 2013). Ciavonne has also collaborated with Amundaraín on several theater pieces, and has worked with the innovative Imaginists theater collective. Ciavonne has a B.A. in Art, and an M.A. in Poetics from New College of California. She lives in Santa Rosa, California.

Ciavonne is the author of Azimuth

“She wears her best dress and she’s hired” describes not a poet but a mourner, but maybe it is the poet, in Carol Ciavonne’s new book Azimuth. The ways, the directions possible in language are the troubling engagements of this book in which a line might appear—for instance, “Not speaking is foreign; the tongue is bronzed”—which is destined to stay with the reader, to nestle in the mind like a pet or a pest forever. The ways this book is beautiful are the same as the ways it is troubling. This is writing as a new necessity. 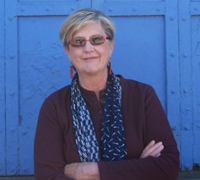