Jan Millsapps is a pioneering digital filmmaker, an early web innovator, and a versatile and accomplished writer. She has produced films, videos, digital and interactive cinema on subjects ranging from domestic violence to global terrorism, and has published in traditional print and online venues. As professor of cinema at San Francisco State University, she teaches courses in digital cinema, interactive cinema, web cinema and short format screenwriting. She earned her B.A. with honors in Creative Arts at the University of North Carolina at Charlotte; her M.A. in English at Winthrop University; and her Ph.D. in Rhetoric and Composition at the University of South Carolina. She also holds an academic certificate in cosmology.

Jan Millsapps is the author of Venus on Mars

“As a kid I wrote stories, even hand-crafted a newspaper (about dogs – to persuade my parents to get me one!). In college I wrote typically anguished poetry. I do remember that my interest in writing diminished somewhat when I declared myself an “art” major. At that time, I foolishly thought creating visuals was totally different from writing words. After college I worked in advertising/PR and soon after that I discovered filmmaking, and realized in both these pursuits I could put pictures and words together – reviving my interest in writing. My dissertation examined media “texts” that used both words and imagery to create meaning (a tough sell to the English Department). More recently, when I committed myself to long-format writing, I decided I was no longer a filmmaker, sold my Bolex and refused to think or behave as a filmmaker (even though I was Professor of Cinema at SFSU – awkward!). Guess what: Venus on Mars so far has spawned a multimedia study guide, a “sound design,” and a transmedia documentary project that involves a feature film plus interactive games and apps – all components that blend words and images. So my writing, in the paraphrased words of Gertrude Stein, has always found a way to “begin again and again.” 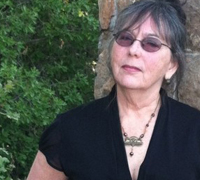