Anna Joy Springer a prose writer and visual artist who makes grotesques – creating hybrid texts that combine sacred and profane elements to evoke intensely embodied conceptual-emotional experiences in readers. Formerly a singer in the Bay Area bands, Blatz, The Gr’ups, and Cypher in the Snow, Anna Joy has toured the United States and Europe being a wild feminist punk performer, and she has also toured with the all-women spoken word extravaganza, Sister Spit. She is author of the illustrated novella The Birdwisher (Birds of Lace) and a graphic narrative, In An Egg, forthcoming. She received her MFA in Literary Arts from Brown University in 2002, and she is an Assistant Professor of Literature at University of California, San Diego where she truly loves teaching courses in Experimental Writing, Graphic Texts, and Postmodern Feminist Literatures.

Anna is the author of The Vicious Red Relic, Love

“Virtual Reality has influenced my writing – Virtual Reality like the Peter Pan ride at Disneyland where you are in this ship and you find yourself sailing over London, which is tiny and sparkly beneath you – I saw that once when I was a kid and I thought, “Somebody made this. I want to make this.” And then, lots and lots of television shows and advertisements, the blur and hum of background narrative always making things relate, and then authors that deal in the grotesque – Mishima, Dostoyevski, Bruno Schulz, Kathy Acker, Claudia Rankine, Rikki DuCornet, Helene Cixous. Punk and Riot Grrl Fanzines, punk songs, 20th c. composers, opera, 1930’s cartoons, big Depression-era dance numbers. Jean Genet, Captain Caveman, and Ms. Magazine.” 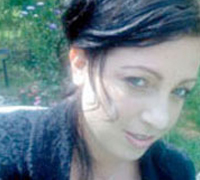