Johanna Stoberock in Conversation with

Nicole Zelniker — Until We Fall

Isla, a Black, transgender girl, is an apolitical student when government forces 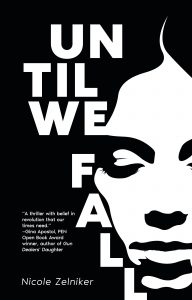 arrest her and her teacher for alleged revolutionary activity. This action turns Isla first into a prisoner, then into an escaped prisoner, and ultimately into an activist working for social justice.

Zelniker takes readers on an exhilarating ride marked by danger, close calls, and betrayals, with love and friendship as the reward.

“A thriller with belief in revolution that our times need.” — Gina Apostol, winner of the PEN Open Book Award, author of Gun Dealers’ Daughter and The Revolution According to Raymundo Mata

Nicole Zelniker (she/her) is a writer and activist currently living in Chapel Hill, North Carolina. She is the author of several books, including Mixed (The Nasiona), Last Dance (Atmosphere Press), and Letters I’ll Never Send (Atmosphere Press). Until We Fall is her first dystopian novel. 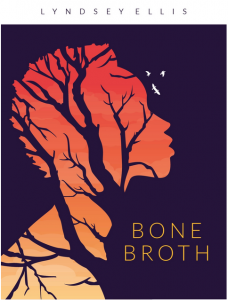 After the passing of their volatile patriarch, Justine and her adult children find themselves within one another’s daily orbit in trying ways in North St. Louis. Justine, the new family matriarch, struggles to connect with her children and refuses to acknowledge the details of her murky past. Raynah, the unruly spitfire social activist, is determined to uncover the truth of that past so that she can move on with her present. Lois, the struggling real estate agent, contends with the reality of white flight while also dealing with the older emotional toll of violently losing her son. And Theo, the public servant, battles with the memory of violence, love lost, and his own sexuality.

In clear, cutting, biting prose, Ellis explores how trauma affects family dynamics, how it permeates every aspect of life, and how reckoning and reconciliation require the strength and courage to confront all the broken, jagged memories from the past.

“Ellis has a keen eye for the ties that break, and bind, be they family or frie

ndships. Bone Broth is a complicated novel about complicated times and one readers will find unputdownable.” —Soniah Kamal, author of Unmarriageable

Lyndsey Ellis is a St. Louis-born fiction writer, essayist, and cultural worker. With a BA in English from the University of Missouri-Columbia and an MFA in Writing from California College of the Arts in San Francisco, she strives to explore intergenerational trauma, hardship, and struggle. In 2016, she was a recipient of the San Francisco Foundation’s Joseph Henry Jackson Literary Award and in 2018, she received a grant from the Barbara Deming Memorial Fund for fiction. Bone Broth is her first novel. 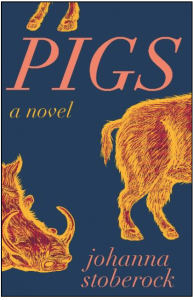 garbage. Trash arrives, the children sort it, and then they feed it to a herd of insatiable pigs: a perfect system. But when a barrel washes ashore with a boy inside, the children must decide whether he is more of the world’s detritus, meant to be fed to the pigs, or whether he is one of them. Written in exquisitely wrought prose, Pigs asks questions about community, environmental responsibility, and the possibility of innocence.

“A lyrical, enthralling, and dark-inflected allegory, equal parts Italo Calvino, Angela Carter, and Lord of the Flies.” —Jonathan Lethem, author of A Gambler’s Anatomy and The Feral Detective

Johanna Stoberock is the author of the novels Pigs (Red Hen Press) and City of Ghosts (W.W. Norton). The 2019 recipient of the Artist Trust/Gar LaSalle Storyteller Award, 2016 Runner Up for the Italo Calvino Prize for Fiction, and a 2012 Jack Straw Fellow, Johanna has received residencies at the Corporation of Yaddo, the Vermont Studio Center, and the Millay Colony. Her work has appeared in the Chicago Review of Books, Lit Hub, the Best of the Net Anthology, and elsewhere. She lives in Walla Walla, WA.

David Jackson Ambrose has an MFA in Creative Writing from Temple 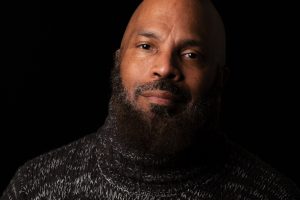 His debut novel, State of the Nation, was a 2018 Lambda Literary Award finalist in the Gay Fiction category. His second novel, A Blind Eye (NineStar Press) was named by Lambda Literary as one of April 2021’s most anticipated books.

He has over twenty years’ experience working in the social services field with special needs populations with intellectual and developmental disabilities and behavioral health issues.

“A mesmerizing tale of racial inequality and sexual discovery.” —Kirkus, review of State of the Nation 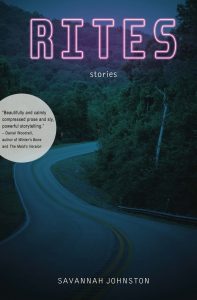 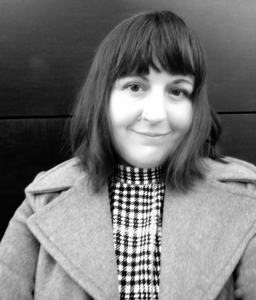 Set in Oklahoma, this collection of short stories documents the quiet sorrow of everyday life as Johnston’s characters traverse the normalized, heartbreaking rites of passage such as burying a grandfather, mother, or husband, becoming a sex worker, or reconnecting with family after prison; the effects are subtle, yet loud, and always enduring. Johnston delivers this economy of loss and resilience with biting, captivating prose.

“Savannah Johnston in her debut collection, Rites: Stories is shown to be a writer of beautifully and calmly compressed prose and sly, powerful storytelling.” —Daniel Woodrell, author of Winter’s Bone and The Maid’s Version

Savannah Johnston is a citizen of the Choctaw Nation of Oklahoma. Her work has appeared in Gulf Coast, HTMLgiant, and Gravel, among others. She lives in New York City. 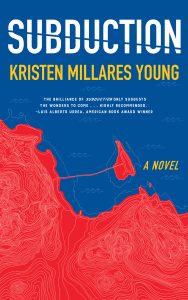 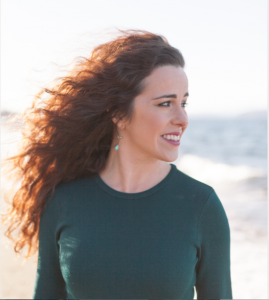 ing the shattered remains of her marriage and a betrayal by her sister, in the throes of a midlife freefall, Latina anthropologist Claudia Ranks retreats from Seattle to Neah Bay, a Native American whaling village on the jagged Pacific coast. Claudia yearns to lose herself to the songs of the tribe and the secrets of her guide, a spirited hoarder named Maggie. But when, spurred by his mother’s failing memory, Maggie’s prodigal son Peter returns seeking answers to his father’s murder, Claudia discovers in him the abandon she craves. Through the passionate and violent collision of these two outsiders, Subduction portrays not only their strange allegiance after grievous losses but also their imperfect attempts to find community on the Makah Indian Reservation.

“The brilliance of Subduction only suggests the wonders to come. It is a good day for us when Kristen Millares Young puts pen to paper. Highly recommended.”—Luis Alberto Urrea, winner of the American Book Award and author of The House of Broken Angels

Kristen Millares Young is the author of the novel Subduction, a Paris Review staff pick called “whip-smart” by the Washington Post and “a brilliant debut” by the Seattle Times. Shortlisted for the VCU Cabell First Novelist Award, Subduction won silver Nautilus and IPPY awards and was a finalist for a Foreword Indies Book of the Year and two International Latino Book Awards. Her essays, reviews and investigations appear in the Washington Post, The Rumpus, PANK Magazine, the Guardian, Literary Hub, and the anthologies Alone Together and Advanced Creative Nonfiction. She is the editor of Seismic: Seattle, City of Literature, which is a finalist for the 2021 Washington State Book Award in Creative Nonfiction. A former Hugo House Prose Writer-in-Residence, Kristen was the researcher for the New York Times team that produced “Snow Fall,” which won a Pulitzer. She teaches a bilingual writing workshop for the Humanities Washington Speakers Bureau. 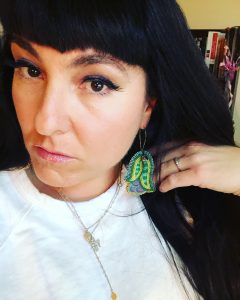 Erika T. Wurth’s speculative novel Whitehorse is forthcoming from Flatiron/Macmillan. A writer of fiction, nonfiction, and poetry, she teaches creative writing at Western Illinois University and has been a guest writer at the Institute of American Indian Arts. Her work has appeared or is forthcoming in numerous journals including Buzzfeed, Boulevard, The Writer’s Chronicle, Waxwing and The Kenyon Review. She is a Kenyon Review Writers Workshop Scholar, attended the Tin House Summer Workshop, and is a narrative artist for the Meow Wolf Denver installation. She is of  Apache/Chickasaw/Cherokee descent and was raised outside of Denver where she lives with her partner, stepchildren, and extremely fluffy dogs.

“Wurth is a master of brutal beauty and hypnotic prose.” —Andrea Kneeland, author of How to Pose for Hustler 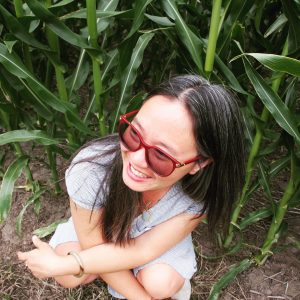 Lily Hoang is the author of five books, including A Bestiary, a PEN USA Non-Fiction Award finalist, and Changing, the recipient of a PEN Open Book Award. She has two forthcoming works in 2021: her novel Underneath, winner of the Red Hen Press Fiction Award, and her micro-tale collection The Mute Kids (Spuyten Duyvil Press). She is the Director of the MFA in Writing at UC San Diego.

“Fearless, brilliant, and incessant, Underneath is both a page-turner and a beast, one that gets you high on the terror of being alive.” —Blake Butler, author of Alice Knott