Kim Dana Kupperman a critically acclaimed, award-winning essay collection, I Just Lately Started Buying Wings. Missives from the Other Side of Silence(Graywolf Press, 2010).  She is the lead editor ofYou: An Anthology of Essays Devoted to the Second Person (2013) and publisher of the anthologyEssaying the Essay (2014).

Ms. Kupperman has been a teacher and editor for thirty years. Currently, she is a guest faculty member at West Virginia Wesleyan University’s low-residency MFA program and at the Johns Hopkins Masters in Writing Program. From 2011-2014, she was the Visiting Writer-in-Residence in nonfiction at Fordham University, and from 2010 to 2015, she was a faculty member at Fairfield University’s low-residency MFA. She is the former managing editor of the Gettysburg Review, where she also coordinated an annual summer writers’ conference.

Her work has appeared in numerous literary journals and been anthologized in Best American Essays and elsewhere (see publications/ephemerafor more information). Awards include the 2013Normal School Prize, the 2010 Bakeless Prize in Nonfiction, the 2003 Robert J. DeMott Prose Prize from Quarter after Eight, and first place in the 1996 Elie Wiesel Prize in Ethics Essay Contest.

Ms. Kupperman is the recipient of fellowships from the Bread Loaf Writers’ Conference, theKenyon ReviewWriter’s Workshop, the Pennsylvania Council on the Arts, the Center for Book Arts, and the Virginia Center for the Creative Arts.

Kupperman is the author of The Last of Her

“I’ll often look at a word’s etymology as a way into exploring meaning and, potentially, a way into locating the origin of an idea. This kind of rumination is crucial in the essay, a kind of chewing on language. An essayist is, essentially, writing the biography of a thought, allowing cognition itself—its circuitry and obsessiveness, its “moments of being,” as Virginia Woolf called it—to play out on the page.” 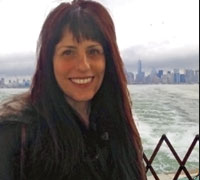 📕 Get your copy on Amazon: https://bit.ly/3hTWKrC

NMWA (@WomenInTheArts) presents a conversation with Dr. Gordon-Chipembere and Dr. Cleveland (@CSCleve) on their journeys as artists inspired by spiritual iconography, traveling from the spark of divine inspiration to a work’s creation.

The submission for Addie's fanart contest is still

"A stutter is always a stutter, even when silent."