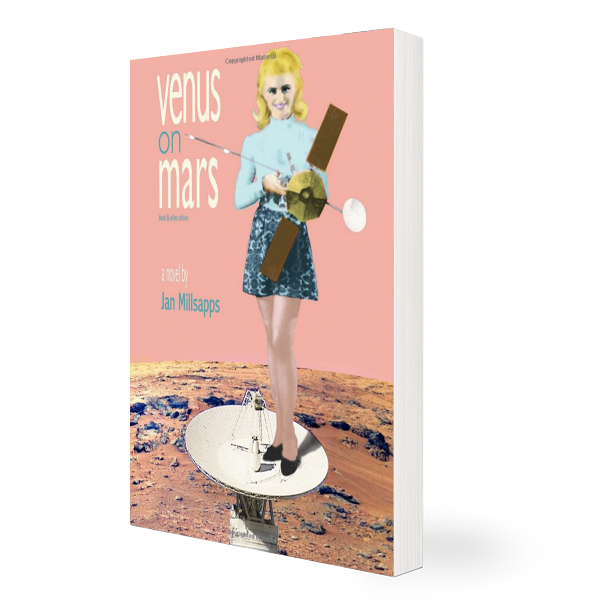 Venus on Mars
a novel
by Jan Millsapps, finalist for the Mars One mission
with music by Phill Sawyer
“a profound story full of heart, wonder and wisdom”
—Harriet Ellenberger, Co-Founder and Co-Editor of Sinister Wisdom

“Three women – three generations – all linked by a mysterious journal, one man, and the enigmatic planet Mars. With great imagination and a lyrical flair, Jan Millsapps has fashioned an engaging tale about finding your place in the cosmos.”
—Marcia Bartusiak, author of The Day We Found the Universe

”In a style that recalls the haiku imagery of Basho and the laconic economy of Hemingway, Millsapps writes across the unbounded interplanetary gulf that separates Earth from the brooding red planet Mars and intermingles the lives of three generations of women trapped in an involuntary struggle for gender equality that persists, even in the halls of haute science. Millsapps has a literary gift in her ability to bring the reader inside the eyes and mind of her characters. Every word is carefully crafted and delicately placed, every page magical to read. Even if the reader knows nothing about astronomy, Venus on Mars is a feast.
—Dana Berry, producer of Hubble’s Amazing Universe, Finding the Next Earth, and Emmy-nominated Alien Earths; author of Race to Mars and Smithsonian Intimate Guide to the Cosmos
ABOUT THE NOVEL

Summer 1971. A lone spacecraft is on its way to Mars. Meanwhile Venus Dawson heads toward Pasadena – and back to her job at the Jet Propulsion Laboratory, where confidence is high among rocket scientists that the red planet will soon reveal its secrets.

Venus is in no hurry. Her male colleagues make lewd jokes about her, enter her in beauty contests against her will, and encourage her to wear her miniskirts even shorter. So she dawdles as she drives, examining the journal she’s just inherited, written by her Great Aunt Lulu, secretary “with benefits” to a famous astronomer, and a woman who gazed at the red planet through a giant telescope long before women were allowed to do such things.

The clever JPL scientists are certain their new spacecraft will discover evidence of life on Mars, but Venus finds it first – on the pages of Lulu’s journal. But before she can use this information to level the workplace playing field, a cosmic misstep strands her at Lulu’s old haunt, Lowell Observatory in Flagstaff. Venus must navigate the Victorian era and the space age simultaneously to claim her place in an expanding universe.

In this stylish and edgy novel, author Jan Millsapps deftly teases the female experience out of a history of mostly male astronomers and rocket scientists, and tells a mesmerizing story about generations of women struck by the stars.

Be the first to review “Venus on Mars” Cancel reply