A Song of Ilan 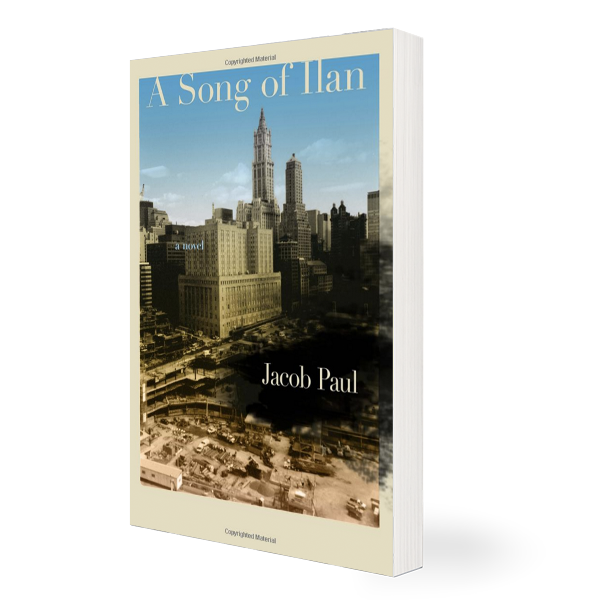 A Song of Ilan

A Song of Ilan
a novel
by Jacob Paul
“Paul’s prose is skillful, almost ornate, and obsessed with the truth of the modern experience of religion. A Song of Ilan is a remarkable exploration of issues and experiences that are often discounted or outright ignored in American writing today.”
— The Public

“Jacob Paul’s A Song of Ilan is tour de force of structural experiment that leaves not a thread untied and moves from beginning to end with a mesmerizing if not horrifying fatality. Ilan, once an Israeli soldier, shot a suicide bomber to death in a cafe; ten years later, alcoholic, spiritually paralyzed, he turns himself into a suicide bomber, haunting the New York subway system with explosives under his coat, the only truth he knows, the only way to God. A spectacular book, beautiful in its rhymes, daunting in its ethical interrogation.”

—Douglas Glover, author of Elle and Savage Love
“A philosophic meditation on the interplay between religion, violence, and personal faith, A Song of Ilan is about what it means to live in a world after 9/11, and the wars in Iraq and Afghanistan, as seen through its protagonist, Ilan’s, desire for God. Through Ilan we see how a direct relationship with God (or the hope for God), divorced from the structure of religious institutions, might take the form of romantic love, and in that relationship’s crisis, take on the perils, obsessions, and violence of that love. A Song of Ilan is necessary reading, especially against the backdrop of recent conflict in Gaza, for anyone who wishes to understand the personal, spiritual, and political impact of religious terrorism, and of the violence that seeks to suppress it.”
—Mark Levine, New York City Council Member and Chair of the City Council Jewish Caucus
“A Song of Ilan is a dizzying, rhapsodic, and thrilling book that challenges readers to think about how we live, love, and die. A breathless read that plunges us into a brilliant and tortured mind, A Song of Ilan will haunt your days and nights, your kitchen, your bedroom, as well as and your commute, making you wonder who your neighbor, your colleague, your lover really is. Equally elegant and compelling as Paul plumbs rock climbing and scripture, terror and survival, A Song of Ilan strives heroically toward, in Donald Barthelme’s words, ‘the as-yet unspeakable, the as-yet unspoken.’”
—Matthew Batt, author of Sugarhouse

About the Book
The second in Jacob Paul’s thematic trilogy exploring the relationship between spirituality, religion and terrorism, A Song of Ilan explores how the desire for a clear answer to an ever louder question of faith might eventually resolve in self-immolation and mass violence. The book’s title borrows the structure of the opening line of so many of the Psalms – A Song of David, A Song of Solomon, A Song of the sons of Korach, etc. – This is a song of Ilan, Ilan’s psalm, his prayer, his desperate plea.
A Song of Ilan tells the story of Ilan Frank and the woman he loves, Yedit, tells it over the course of a single transformative day, a day fractured over three versions of reality. It’s a day on which the specters of Ilan’s military service during the first Intifada, his increasingly uncertain old on Yedit, and his resurgent crisis of faith finally crescendo to undo his comfortable life as a financial advisor in New York City.
THE PAST: Ilan, an Israeli Jew raised moderately Orthodox in the US, had returned to Israel for his mandatory three years of service in the Israeli army early during first Intifada. While off-duty, waiting for his fiancé to join him at a sidewalk café in Tel Aviv, Ilan realized that the unseasonably baggy coat worn by the woman approaching concealed a suicide bomb. He shot her, preventing the bombing. And yet, though it’s the most justifiable shooting imaginable, a life-saving killing, Ilan can’t accept having killed. Unable to reconcile his status as a minor hero with his guilt, he returns to the US, where he exchanges faith, heritage and identity for as much risk as he can: in a job on Wall Street, in the mountains with his best friend, Louis, an Indian veteran of Himalayan fighting in Kashmir, and in the city’s bars’ booze and singles.
YEDIT: An Israeli orphan adopted by American parents, Yedit writes academic translations of the Psalms, translations that reveal their wonder and their sarcasm. She composes, and her act of composition woos and wins Ilan. And when she finishes composing and publishes, her book removes her from him, offering its scintillating heresy in exchange.
FAITH: Yedit’s translations, and the original Hebrew of the Pslams viewed through those translations, hound Ilan, torment him and prove to him that a crisis of faith suppressed is not a crisis of faith erased. As Ilan loses control of his thoughts’ directions, he increasingly realizes, to his horror, that his relationship to God and to Ilan’s own peace, lies in the blood pooling beneath the Palestinian woman he shot so long ago in Tel Aviv.

Be the first to review “A Song of Ilan” Cancel reply