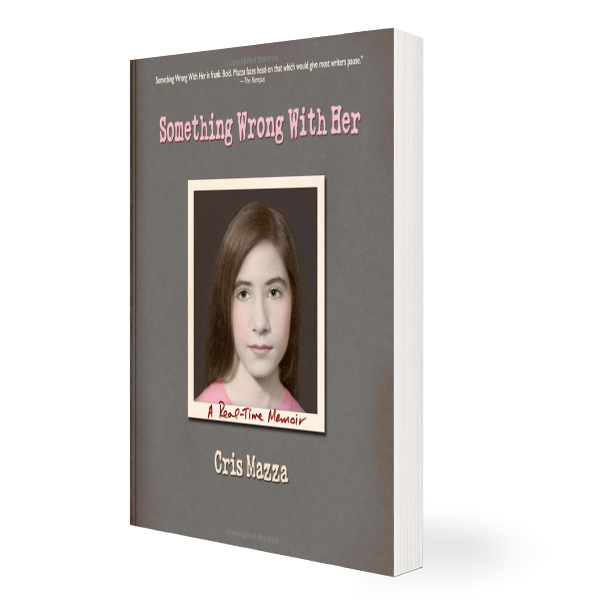 Something Wrong With Her

a real-time memoir by
Cris Mazza
“Something Wrong with Her is frank. Bold. Mazza faces head-on that which would give most writers pause.”
—The Rumpus
“Stunningly honest and formally audacious… Mazza’s decision to let speak a “character” that other memoirists would have had remain silent indicates what a vital expansion Something Wrong with Her is for the field of memoir.”
–The Brooklyn Rail

“In an attempt to locate the origins of her anorgasmia, Mazza exhumes memories of her earliest sexual encounters, first with a boy who played “rape games” with her in private, then with a boy who, unaware of this history, pushed things too far too soon. She subjects these and other pivotal moments in her sexual history to repeated analysis: Do these experiences, she asks, constitute the source of her ongoing problems with sex — or does such a narrative accord them too much power? Is her anorgasmia a physiological problem, unrelated to past trauma? Are these experiences classifiable as traumatic, when they are so utterly —wretchedly — normal?”
—The New Inquiry

“Mazza’s story is anything but frigid. It contains a hot, complex, rich texture in ample, musical supply. Aggressive and responsive…”
—The Believer
“The most unusual love story you will ever read.”
—Marion Winik
“An increasingly and pleasingly unhinged experiment in autoforensics and self-consciousness… part sexual history and part detective story.”
—Ander Monson, editor, New Michigan Review
“Beyond brave writing.”
— Lidia Yuknavitch, author of Chronology of Water and Dora: A Headcase

ABOUT THE BOOK
Something Wrong With Her is a groundbreaking “real-time” memoir by author Cris Mazza that begins with Mazza’s anorgasmia – the inability to have an orgasm.

Research suggests that at least 75% of women cannot reach orgasms through vaginal intercourse, and upwards of 15% are completely anorgasmic. The surplus of contemporary sexual memoirs would have us believe otherwise.

But Something Wrong With Her is not a book about overcoming anorgasmia. Rather, it is a poignant memoir about a girl who didn’t feel the sexual awakenings she knew she was supposed to feel, and about the boy who loved her nonetheless. Thirty years later Cris Mazza went back to find that boy, now a man, only to discover that he’d never stopped yearning for her. Worse, in an attempt to numb his feelings for her, he’d sealed himself into an abusive marriage.

Something Wrong With Her is an astonishing real-time testimony of a couple’s reconnection while — and within — the writing of this memoir, and their candid wrestling with 30-year-old memories, questions and regrets.

Be the first to review “Something Wrong with Her” Cancel reply