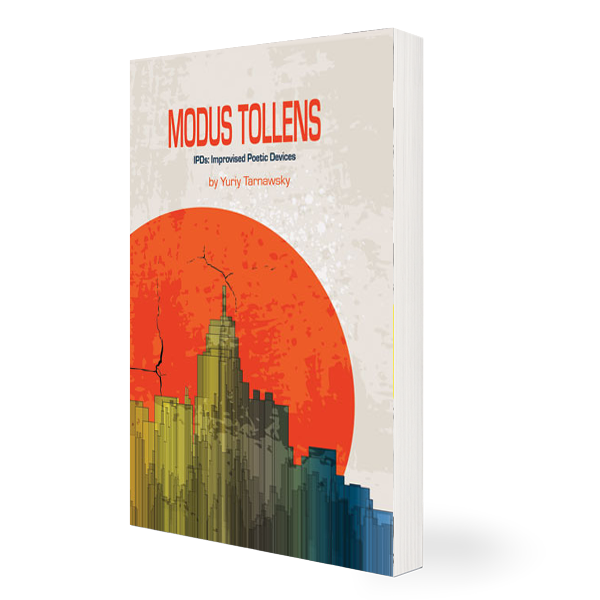 “What I love about Yuriy Tarnawsky’s poetry is the sense one gets of the poet’s determined dissection of his surroundings, both in word and in world. The poet seems to be questioning his belief in the idea of meaning, he having been raised, of course, with the notion that life is meaningful. So he turns over both leaf and sheaf, and his discoveries alternately appall and appeal: is life order or ordure? Because no clear answer can be discerned, he also turns his attention to his own investigative tools, like the observer who, having accidentally set fire to an ant he was studying through a magnifying glass, now ponders the power of the magnifying glass itself. Tarnawsky breaks words open to find the worlds they reveal, as if he were looking for the lost letter ‘l,’ which stands for ‘love,’ for only that letter can turn the word into the world.”
—Eckhard Gerdes, Journal of Experimental Fiction

In Modus Tollens Yuriy Tarnawsky fully develops the technique of Heuristic Poetry that relies on ambiguity, sketched out in some of his earlier collections, which forces the reader to create the poem for himself as he reads through the text, becoming in the process its co-author. In the end he discovers himself standing alone on the denuded earth beneath an empty sky.

“In Modus Tollens, Yuriy Tarnawsky shows us the world living its passions out in a language which is one of its passions. Contra Wittgenstein, Tarnawsky breaks the silence of that about which we cannot speak. He cannot remain silent, so he finds a language which can, which does speak only in the only language of poetic truth — the broken tongue of hidden elegance where a stream that seems to exist does exist and a god that exists — if at all — obliquely bathes in it.”
— Martin Nakell, poet, Tautological Eye and Settlement

Be the first to review “Modus Tollens” Cancel reply