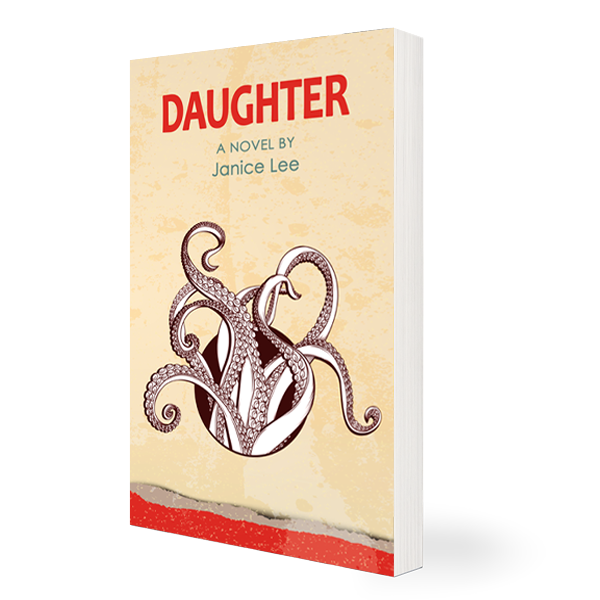 “Janice Lee is a genius.”
—Eileen Myles, author of Inferno (a poet’s novel)

In Daughter, a daughter/doctor encounters the dead body of an octopus in the desert, perhaps the corpse of a lost god, and through her study of his physical organs, sheds more light on her relationship with the world at large. What is it like to be a daughter? What is it like to be God?, the text asks, intuiting implications of the consciousness of God and of the hermetic vessel that is narrative itself, while revealing the sanctity of living, the unholy holiness of strange encounters, and the hidden mysticism of language.

“Daughter, the new volume by Janice Lee, seems to rise as intuitive quantum ascent. It is praxis of the marred, of the seemingly uneven. Janice Lee understands that writing cannot exist as narrative outcome. In Daughter there is reckoning with the cosmos as phantom, as something that does and does not exist. Energies appear by means of paradox and evaporation.”
—poet Will Alexander, author of The Sri Lankan Loxodrome

In Daughter, Janice Lee floods the body of a book with the body of a body, all its hybrid, constantly damaging and mending cells. From field to field among the pages we are subject to a brain-damaged, collide-o-scopic file of some internet-age Acker’d Frankenstein having lived to see god die; and yet still must go on walking in the deity’s corpse, inside of which the billion bodies in such image have built our huts of shit and shit inside them. “The sea is a mysterious force, but there is no sea in the desert,” she writes, prodding at the hole left in the fabric on the earth between the homes: another phantom in a field of phantoms who themselves have again died. The result is a meticulous and terrifying resurrection, a glitchy screamtext passed in dire silence to the reader the way blood passes from mother into child.
—Blake Butler, author of There is No Year

The word “monster” derives from Latin monstrum, an aberrant occurrence, usually biological, that was taken as a sign that something was wrong within the natural order. (Wikipedia) As Janice Lee proves, the same is true for daughters. Lee’s surgical cadences and sharp fragments work here as writing will work-to force attention to detail. Which is the unnatural order of things.
—Vanessa Place, author of La Medusa and Dies: A Sentence

Be the first to review “Daughter” Cancel reply