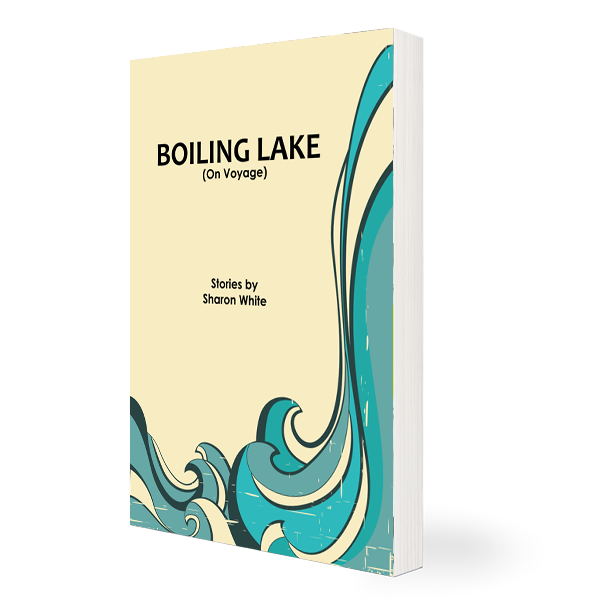 The very short stories in Boiling Lake (On Voyage) inhabit the voices of travelers from the past, present, future — and other worlds. The tales take their language from exploration narratives and the terrain of the heart. Written with the authority and inventiveness of an award-winning poet, these tales challenge and unsettle the reader just as foreign landscapes force us to reexamine our identity in the world.

“With mad singing in strange lands and familiar places, these tiny stories speak a language of dark lyricism. Unleashing the unconscious, White dares to venture through a tapestry of nightmare memories to illuminate strange moments of reality bordered by pure beauty. The book flies fast and free on the wings of words lit by the light on the moon.”
—Aimee Parkison, author, The Petals of Your Eyes

“Boiling Lake (On Voyage) is that place of in-betweens, mergings, undefinable spaces where the familiar rubs up against and engages the exotic and unknown: the so-called “human” world and the natural one; the America of strip malls and the America as it appears to a Mexican immigrant; a series of islands described from the viewpoint of voyagers across the temporal spectrum of history and the inhabitants of those islands; a woman’s body in a catalog of materialist and feminist protestations. These voyages are described in a series of blunt, uncompromising prose pieces, in search of an unknown destination, a “fertile country inhabited by sweet dispositioned savages who can be harnessed and used to good advantage.” The striking energy and territory of Boiling Lake (On Voyage) is a deeply conflicted cultural, metaphysical, and psycho-sexual space, a myriad, cubistic series of personae and forgotten voices that make our post-natural world both new again and hauntingly known.”
—Sam Witt, poet, Sunflower Brother and Everlasting Quail

Be the first to review “Boiling Lake, Stories” Cancel reply