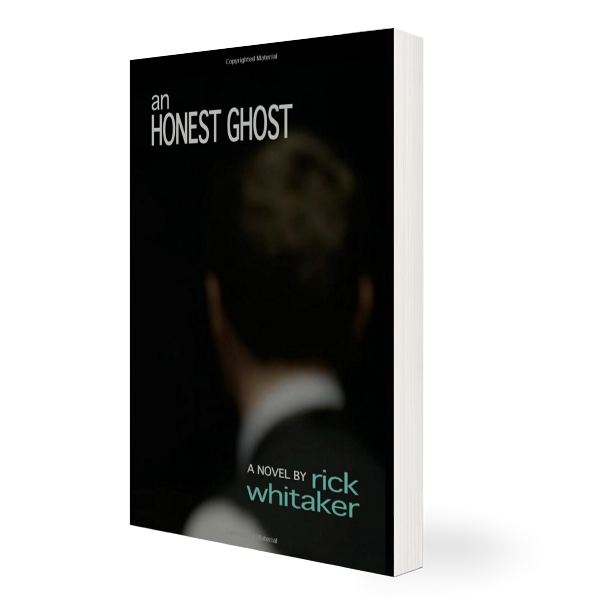 An Honest Ghost
a novel

A 2013 “Books of the Year”*
– Times Literary Supplement & John Ashbery

“An impressionistic portrait of literary subjectivity…revealing the opportunities for pleasure and refuge available to the inveterate reader.”
– Lambda Literary

About the Book
An Honest Ghost is published in multiple editions: full-color paper, black and white paper, ebook, and full-color, expanded interactive.

Inspired by the task of unpacking his library, the narrator returns to writing an autobiographical novel about the sudden appearance his son, Joe, who at age nine shows up on the narrator’s doorstep for the first time. The narrator, unnerved by the prospect of sharing his life with his extremely precocious child, is nonetheless moved by Joe’s arrival. He has to change his own life by accepting the responsibility of fatherhood, a role he shares slightly with his young English boyfriend, David. Joe’s unpredictable mother, Eleanor Sullivan, seeks her own satisfactions. The domestic scene is affected when David introduces a new friend, Roy Hardeman, a strange gay cop who dies as mysteriously as he arrived. The heart of the novel is the ghostly, persistent, unreliable qualities of literary and personal memory, and the ways in which a narrative can hold onto, recapture, and transform memory.

Published as an interactive iBook as well as a paperback and ebook, Rick Whitaker’s semi-autobiographical novel, An Honest Ghost, consists entirely of sentences appropriated from over 500 books. Whitaker limited himself to using 300 words per book (in accordance with Fair Use); never taking two sentences together; and never making any changes, even to punctuation. In the iBook version, touching a sentence brings up its original source: a book’s title, author, and page number. The experience of acknowledging each sentence as literary artifact, combined with the imagined accretion of books that built An Honest Ghost, deftly mirrors the burgeoning nostalgia in the narrator’s voice and, fittingly, in the careful reader’s heart.

More Praise for An Honest Ghost

“Reading An Honest Ghost is an exhilarating, percussive experience, proof that literature is capricious and exalted. I felt like a grand piano some eccentric musician was playing, someone who knew all the composers and couldn’t stick to one for more than a minute. People always praise fiction for being lifelike but Whitaker proves that fiction is better than life—more interesting, much more thrilling, though it is inhabited by posturing, irresponsible, self-dramatizing characters…. The tension and excitement of this prose, constantly buffeting the reader, derives from all the different and unique authors who have contributed to it.”
— Edmund White, author of Jack Holmes and His Friend, My Lives, and A Boy’s Own Story

“Like an Italian micromosaic, whose infinitesimal ceramic tesserae generate an unearthly glow just by being in close proximity to each other, Rick Whitaker’s An Honest Ghost is both narrative and objet, a singular work of art whose singularity keeps beckoning to the reader. He has put the force back into tour de force.
— John Ashbery, poet, Self-portrait in a Convex Mirror, Illuminations: Arthur Rimbaud (tranls.), and Collected Poems 1956-87

“An Honest Ghost is brilliantly conceived and brilliantly performed.”
— Adam Phillips, author of Missing Out: In Praise of the Unlived Life and On Kissing, Tickling, and Being Bored

“An Honest Ghost is sheer genius, the uber novel, the ultimate palimpsest. It is a writer’s truth and a reader’s dream. Above all, it is a uniquely gripping read.”
— Jenny McPhee, author of A Man of No Moon and No Ordinary Matter

“I am struck by how deeply personal this book feels, even revelatory, as if the author had solicited other voices to perform an autopsy on his most private, intimate self. And of course, I relish in this paradox which debunks all conventional notions of authorship, authenticity, identity and even language. What is remarkable is how Whitaker has performed such a work of genius and pushed it ad absurdum: the extreme bending appears effortless and forms a perfect circle, wherein full authorship of book, i.e. all the citations at the end of the book, are truly at the discretion of the reader, with all the responsibilities, pangs and joys this entails. This time, Whitaker is asking us, readers, to assume the position!”
— Filip Noterdaeme, artist and author of The Autobiography of Daniel J. Isengart

Be the first to review “An Honest Ghost” Cancel reply