Waiting Up For the End of the World 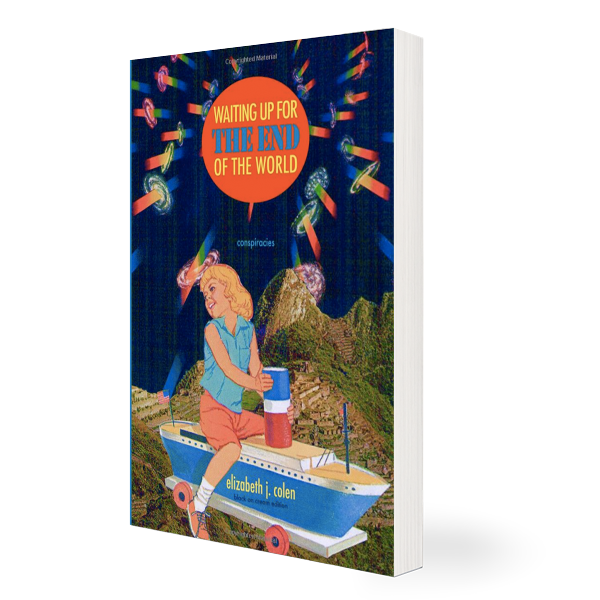 Waiting Up For the End of the World

“So smart and quintessentially American”
— Suzanne Paola, author of Body Toxic and The Lives of the Saints

“In Elizabeth J. Colen’s Waiting Up for the End of the World, conspiracy theories provide the dark and obsessive scaffolding for poems woven with myths of paranoia as well as fragmented scenes of psychological tension. Colen transforms her sensational subjects with an eerie calm or giddy perversity, committed to juxtapositions and details that shiver with a grotesque luminosity: wig strands “read” a palm, coffee grounds in a mug form the shape of a skull, a brother staples a girl’s arm to her sleeve. The duende who beckons from these poems is both pulsing alarm and violent seducer. In Colen’s realm of danger, we’ve “followed the sound of the siren.”
—Anna Journey, author of If Birds Gather Your Hair for Nesting

Waiting up for the End of the World examines 20th / 21st century conspiracy theories from a poetic standpoint. First-person narrator road trips around the globe—from New York City, Dallas, Atlanta, Georgia, and Gakona, Alaska to Area 51, Lockerbie, Scotland, London, Paris, and Indonesia—to visit firsthand the sites of alleged secret plans and alliances and their sometimes cataclysmic outcomes, investigating through verse such topics as black helicopters, chemtrails, the North American Union, the fluoride conspiracy, and the JFK assassination, and exploring possible links between government and corporate corruption and the on-the-ground results of continued global overconsumption.

“Colen is not timid about addressing the perversities of American culture head-on… The subjects are dark, generating perhaps more discomfort than comfort, but Colen reminds us that the human heart is still quite functional.”
—D. A. Powell, Drunken Boat

“The poets I long for are the ones who aim their instruments at the eyes of culture and shoot without question. Elizabeth Colen is one of those poets I always trust to let it all be done! Count the bodies afterward! The conspiracy of Waiting Up for the End of the World for instance, it’s her newest, brilliant collection. ‘Arsonists are such failures at love.’ See, she just tells us where fire fails. And as the house burns down THIS BOOK is what you should grab when running to the door. Wave it in the faces of failure, which is another magic of waking us.”
—CA Conrad, author of THE BOOK OF FRANK

“In Waiting Up for the End of the World: Conspiracies, Elizabeth Colen gives us a book of poems built around conspiracy tales, those guiding myths of our culture, a book so smart and quintessentially American it feels both uniquely personal and blazingly collective. Colen probes the nature of belief and gives us paranoia as resistance, storytelling as power, and the personal as inextricably tied to the social and political. ‘I am eating this piece of cake./The first piece was for me,/the second for the end of the world,’ she writes in ‘Day After, Over London,’ a poem that reimagines the crash of Pam Am Flight 103. The poems, stylistically flawless and each a jagged shard of the American dream, challenge us to rethink what we believe we know about the defining tales of our culture.”
—Suzanne Paola, author of Body Toxic and The Lives of the Saints