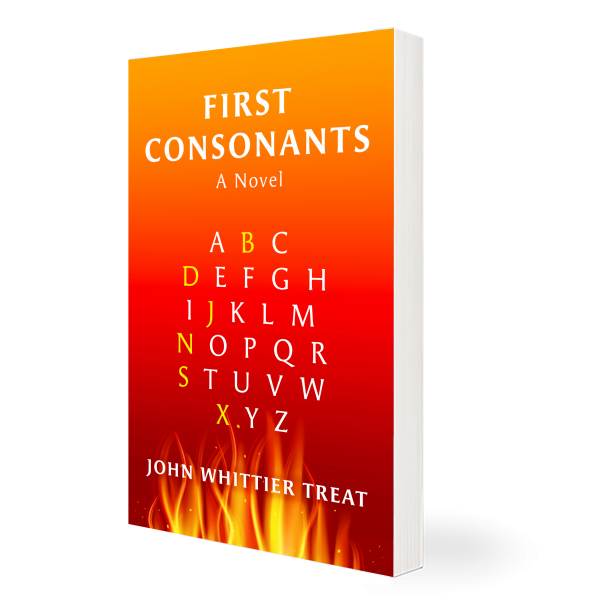 Brian is an unremarkable child, until he isn’t. As other children start to babble, adding to their vocabularies day by day, Brian grows quieter with age, stumbling over the words he needs to lead a normal life: He is a stutterer. Stuttering defines his formative years, filled with prejudice and bullying, as he creates his own scales of right and wrong, both justified and unjustified. He uses his fists whenever words fail him. As he increasingly fills with rage after life-changing abuse at the hands of a priest who takes advantage of his vulnerability, he resorts to ever greater acts of violence, risking everything he has worked hard for in life. Brian’s one hope for his redemption? Alaska. An elderly Brian moves to the Alaskan outback, and here he attempts to redeem himself and the world.

“First Consonants touches on the origins of violence, of love, and what it means to find one’s way through the maze that is the world. Here is a story that is engrossing, vulnerable and wise in a way that few books are these days.” —Jim Krusoe, author of The Sleep Garden

First Consonants is a searing tale of self-determination and redemption that follows the life of Brian Moriarty, a man who stutters, as he fights his way through life, attempting to understand himself and the world.

“A compelling, at times relentless novel that gives the term antihero a brand new spin.” —Felice Picano, author of Like People in History, The Book of Lies, and Onyx

“A flame of rage burns at the core of Brian Moriarty, ignited by a traumatic birth and fueled by a lifetime of debasement and abuse because Brian stutters. The text of John Whittier Treat’s First Consonants is incendiary, placing the reader in the furious heart of Brian’s world. As we may decry his actions, we cannot help but want a balm for him, a cool soothing of his implacable ire, lest it consume and reduce him to ash.” —Terry Wolverton, the author of Stealing Angel

“Brian Moriarty intuits truths about his life he never expresses in words, nor even in thoughts. First Consonants tells the story of his long journey to confront those truths. Brian traverses landscapes, internal and external, and grapples with the reality of violence, the complexity of family, the insidiousness of faith. Thrumming beneath it all, John Whittier Treat’s unrelentingly poignant prose grounds and belies the central theme: the aching unrealized potential of language.” —Ana Maria Spagna, author of Uplake: Restless Essays of Coming and Going

Be the first to review “First Consonants: A Novel” Cancel reply