Being a White Ally: Filling my Mother’s Shoes 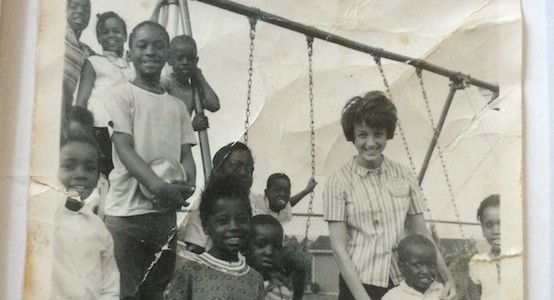 When I was a kid growing up in a white (and cis and straight) suburb of Cleveland, Ohio, my mom worked hard to raise us with sensitivity and intelligence around issues of race, class, physical ability, and discrimination. Not an easy task in a community like that. Even though the combined income of my parents while raising five kids was about a quarter of mine today, there were lots of people who had lots less, and my mom wanted us to know that.

One time, she took my brother and me to the home of one of her clients. She worked as an American Sign Language interpreter in a poor, racially diverse community and all of the people who used the services of her government-funded office were poor. Her plan was to expose my brother and me to the conditions this other family had to live in, which were far inferior to ours, and to then have a conversation with us about class and inequality and social injustice. At the house, my brother and I ran around on the broken floors and bounced off the broken furniture with the black kids who lived there blessed with the kind of beautiful ignorance that attends the innocence that only children know. We leapt in and out of holes in the floor, dug in the dirt exposed by those holes, pulled apart the insects crawling around inside the house, and had a tremendous amount of fun doing it.

After we left, my mom asked us what we thought. We both complained that our own house wasn’t nearly as much fun as theirs had been. So her plan that day fell short, but she continued raising us in the same way. We watched Free to Be You and Me, a feminist and racially diverse children’s program from the 70s that promoted a brand of social justice, which, at the time, was radically progressive. We marched in gay pride parades with my mom, who interpreted for the Deaf folks in attendance. We looked at photos of her when she was a teenager, growing up in a poor neighborhood in southern Ohio, the oldest of two hearing children of Deaf parents, the only white face in a group of brown faces. She volunteered her time at the local playground and taught the kids how to express their feelings without resorting to violence.

Over the past decade or so, the advent and proliferation of social media use brought with it an unprecedented view into the full extent of racism and white supremacy in this country. We now know about the frequency of unarmed black children and adults being killed by police. We know about the myriad social injustices that occur over racial inequality. And just like everyone I know and love, it’s sickened me to witness. But not until last weekend when I attended AWP in Los Angeles did I feel complicit in white supremacy. I’ll explain why.

I recently acquired Jaded Ibis Press in January and proudly updated its mission to define it as a feminist press publishing socially engaged literature with an emphasis on the voices of people of color. I created a contest exclusively for writers of color and found a judge who is a writer of color. I worked to find partners in running the press who were people of color. I accomplished that goal. But one of my partners, Dasha Kelly, wasn’t able to attend AWP and represent the new press and its new mission with me. So it was me with my white face sitting at that table explaining to people our new mission. I had one person say: “but you’re not a person of color.”

On my way to one of the panels, I handed out fliers for our contest to every person of color I saw, and I saw it in many of their faces: an indictment. I worried I was going to be seen as being exploitative or tokenizing. Suddenly, I felt I had no place being the owner of this press with this mission. I thought about dropping it, even. But then I attended a series of panels that solidly reassured me that I’m on the right path. The things I learned and heard impassioned me even more to do what I’m doing.

Here are some highlights:

“We have to look at our industry and look at who has access to power, who has access to publishing. Not only because it should represent our true demographic, but because we have a moral obligation to include more than one voice.”

“We have to challenge ourselves to be deliberate about diverse inclusion and ask: who is missing from this table? The lack of this is called post-intentional racism.”

“The more advanced we are, the more primitive we are.”

“Our work is deeper than deliberate inclusion. It’s the decolonization of our minds. We have to change the gaze.”

“There is a historical lack in formal education of white people on the writings of people of color.”

“My blackness is not a thing to be seen by others, but a light to shine on the world.”

“A better alternative to the word diversity is real racial equity.”

“White supremacy preys on all of us, not just people of color.”

“We are not resisting white supremacy to do people of color a favor. We resist it because it’s a poison for all of us. It’s making a beloved community impossible.”

“It’s not a question of complexion; it’s a question of predicament. The issue is the predicament and the problem is white supremacy and how it’s infected our classrooms and our pedagogy. The implications are not only educational, they’re wildly social.”

“I see my work as a way to use my power—even though it’s wrong that I have it—to write about race for the education of other white people. We can’t write to cure our guilt. But we can do it to begin to pay our debt. I am risking having to do it imperfectly.”

There was so much more. Way more than I can quote. So much that the sum effect was a reorganization of who I am and how I think from the very core. For example: the complicity that I never before owned. I have always thought to myself: I don’t have a single racist cell or molecule in my body. But I have always been wrong.

I am a racist because I have not sacrificed my white privilege to help counter the injustice it does to people of color. I have accepted jobs at companies whose work force is 90% white. I have been working in an industry for more than a decade whose leadership is 97% white male. I accepted a publishing contract from a small press that published mostly white men. It is my white privilege that put me in a position to acquire this press in the first place. I have had the power, always, to not avail myself of these opportunities explicitly because they are not representative of what I believe in, which is true racial equality. And I have not exercised that power. Therefore, I am a racist.

And although it makes me exceedingly uncomfortable to write that, as a fellow white ally aptly put it, I have to increase my tolerance for discomfort if I’m going to take seriously this challenge of being a white ally. I have to do my part and risk doing it imperfectly.

My mom was a white ally before that phrase existed. She was also an able bodied ally. I am so fortunate to have come from her. I will continue the work she started. I will fill her shoes, even though the challenge in today’s world might be radically insurmountable. Perhaps I can work with other white allies and people of color to move the boulder another inch up the hill.

I am starting with getting very clear about what our new mission means in practice:

Scarlet, this blog, will from today forward be a forum for this discussion of true racial equality in publishing and in the literary world. We will pay our essayists, however modestly, because we believe that what they think about this and how they beautifully express it has value.

I hereby invite submissions for Scarlet on this topic. Essays should be between 750 and 1500 words. The pay will be $30 per essay, paid via PayPal on the day of publication. Submissions should be sent to scarlet (at) jadedibispress.com.